It was only a couple of years ago that winter weather hit us hard and put Chicagoland into a deep freeze. That sub-zero temperature blast caused extensive residential and commercial damage. Frozen pipes ruptured and flooded homes and businesses all across the city.

You don’t want to be caught off guard by this kind of cold, wet disaster in your area.

Do you know what to do when frozen pipes burst and soak everything in the house?

The aftermath of a ruptured pipe is harder to deal with than cleanup after a water leak.

It catches most homeowners off guard, so arm yourself now with this action plan and be prepared for the worst.

How Do I Know if a Frozen Pipe Has Burst?

You’re sure the pipes froze during the night. You hope they’ll thaw before the worst happens. If they do burst, these are just a few of the signs that indicate a serious problem.

What To Do When Frozen Pipes Burst: 5 Steps for Controlling the Damage

Our teams stay busy every winter with services that help Chicago homeowners recover from water pipes that burst in the house.

It makes a big difference if you can control the situation until help arrives.

1. Turn Off the Water Supply

The first thing to do when frozen pipes burst is to cut off your home’s water supply. The main shut-off valve is usually located inside the house opposite the exterior pipe’s entrance.

If you need to turn off your property’s entire water system, look for an exterior cut-off valve near your meter. You might also find it outside between the curb and sidewalk in a concrete box just below ground level.

Power Tip: Locate your home’s water cut-off valves now so you can access them in case of emergencies.

Sparking and outages are very dangerous signs after any kind of leaking or flooding situation in the house:

They indicate damage to your electrical system that must be addressed by licensed technicians.

If you suspect a problem, turn off the electricity with your home’s fuse box or breaker panel.

Don’t ever risk personal safety around water and electricity.

Even if you’re sure it’s okay to work in an area, unplug nearby appliances and fixtures. Proceed with a combination of caution and common sense.

Contact your restoration contractor immediately, and explain the extent of damage from frozen pipes that burst in your house.

By calling a restoration company right away, you ensure a prompt response from certified teams who know how to expertly handle burst pipe water damage repair.

Even minor flooding can result in serious problems throughout your home, so line up professional help before you proceed with repairs. 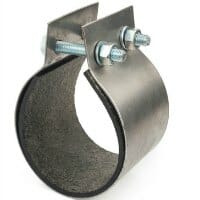 Use a simple clamp repair kit to stop water leakage and stabilize the burst pipe.

The repair process involves wrapping a rubber sleeve around the damaged pipe and securing it with metal clamps. While this technique usually works, understand that it’s a temporary fix.

Power Tip: After clamping the ruptured pipe, open up all cold taps in the house to drain off any remaining water.

Once you have the burst pipe under control, take pictures of all affected areas before beginning any cleanup.

This gives you an accurate record of damages. The documentation helps you and your restoration contractor navigate insurance claims and paperwork.

5. Start Drying Out and Looking Up

Old newspapers serve as one of the best and cheapest materials for soaking up water. Lay down layers to wick up pools and ponds on the floor.

Fans and dehumidifiers help jump-start the drying process. If it’s not too cold and wet outside, open windows in affected rooms.

Keep an eye on the ceilings. Often, overhead frozen burst pipe leaks accumulate slowly creating a dangerous situation. If you see any bulging in the ceiling, poke a hole in the center of the area, and drain excess water into a bucket.

The steps we’ve outlined can minimize damage to your home, but we recommend following through with professional water mitigation, cleanup and restoration.

As soon as you call a professional restoration contractor, crews are on the way to address damage and cleanup.

Your efforts make the cleanup job easier, but always be careful. If you have any doubts about personal safety, wait until professionals arrive on the scene.

Will My Frozen Pipe Burst?

Not every frozen pipe bursts and floods the house. That’s the good news.

However, the bad news is straightforward: It’s not unusual for frozen pipes to burst and cause extensive water damage.

When water freezes inside a pipe, it expands in volume by 9%. When the water thaws, its sudden rush in motion exerts tremendous pressure that bursts the pipe. That’s why it’s good to know how to thaw frozen pipes before they can rupture and soak your home.

How to Claim Damages From a Frozen Burst Pipe

Most homeowners policies cover the damage caused by a frozen burst pipe, but they don’t often cover pipe repairs. You need to document everything affected by the water, including floors, walls, furnishings and belongings.

Call your agent, and schedule an adjuster’s appointment. He or she will conduct a walk-through assessment of your home. If you’re not familiar with the paperwork involved, ask your restoration pros. They can help you navigate all the steps involved in filing a water damage claim.

What Is the Cost to Repair a Frozen Pipe That’s Burst?

The average cost of repairing a frozen burst pipe ranges from $175 to $500. It depends on the location of the damaged pipe, number of breaks in the line and number of lines affected. Extensive repairs to a home plumbing system after a hard freeze can run higher.

Additionally, this figure does not include the costs associated with restoring the home due to the subsequent water damage after a pipe has burst.

Not every easy hack, fast tip or quick trick works on frozen pipes. Some can be dangerous. For example, thawing pipes with an open flame is extremely hazardous.

How to Prevent Pipes from Freezing

You can’t stop winters from sending the mercury into single digits. There isn’t anyway to control how long a freeze will last. You can’t prevent howling wind from making it feel even colder.

You can reduce the chances of frozen pipes with these simple tips.

Dealing with a Frozen Pipe That Burst in Your Chicago, IL Home? We Can Help!

Whether you need pointers on how to clean up after a water leak or tackle ruptured frozen pipes, we’re here to help.

When severe cold blasts your home into the deep freeze zone, don’t face flooding from frozen pipes by yourself.

You can always count on ServiceMaster Restoration by Zaba to answer your first call regardless of the weather.

Do pipes burst when they freeze?

As water molecules freeze, they expand and create tremendous pressure inside a pipe. If the force continues building between frozen areas and faucets, the pipe eventually ruptures. Reduce the chance of burst pipes by letting faucets trickle during a hard freeze.

How long does it take for pipes to freeze and burst?

It depends on their location. Pipes exposed to extreme cold can freeze in less than two hours. When the temperature surrounding a pipe dips down to 20 degrees Fahrenheit, it can freeze and burst within three to six hours.

How can I safely unfreeze pipes?

Safely thaw a frozen pipe by running warm air from a hair dryer up and down its length. You can also wrap pipes with heat cables or warm them with heat lamps or space heaters. Never thaw pipes with an open flame.